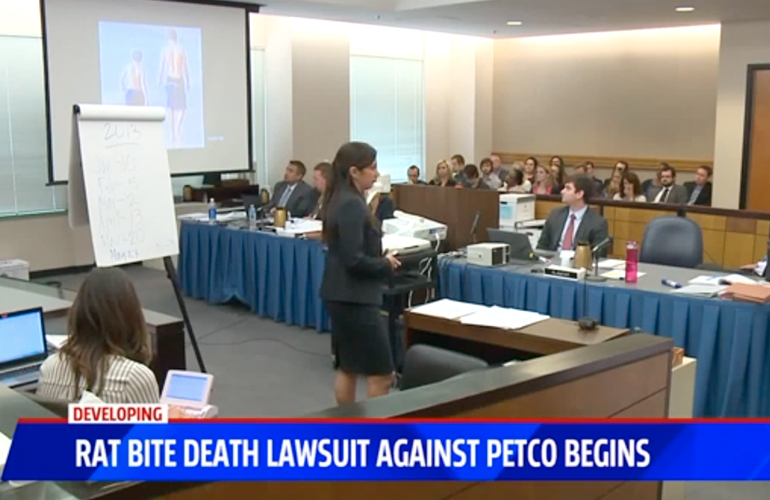 Court ruling could have impact on pet stores across California

SAN DIEGO – A major ruling in a court case Team 10 first told you about.

According to attorneys handling the case, this week a judge denied Petco’s motion for summary adjudication, and extended strict products liability to the sale of animals sold as pets.

The family of 10-year-old Aidan Pankey is suing Petco for his death.

Aidan Pankey died in 2013 from rat bite fever, an infectious disease that can be caused by two different bacteria.

His family says the pet store sold them a diseased pet rat.

In 2014 Team 10 was first to talk to Aidan’s dad who described the emotional and physical toll his little boy’s death took on the family.

He said he couldn’t eat sleep or work.

Nearly three years after suing Petco, the quiet ruling in the case could have a major impact across the state.

“The judge said for the first time in California, we can pursue this case under a strict product liability theory, and that means that Petco has the responsibility to make sure that it’s not selling defective products,” said attorney Bibi Fell of the Gomez Trial Attorneys.

Team 10 asked Fell how it will impact consumers.

“This will make it a lot safer for the general public,” she said.

Fell said the ruling puts the responsibility on pet stores to make sure that they are selling products that are safe.

“It means that Petco has to do some work,” she said. “It needs to make sure that it’s buying rats that are free of disease, and it can do that by putting pressure on its suppliers. The average consumer can’t put pressure on Petco’s suppliers.”

The ruling stated, “The court is acutely aware that although it is rare, the consequences of not identifying RBF in a child, is deadly. Petco and suppliers of rats are in a better position to be able to inform of the risks of injury, and to possibly ensure their rats are free at the time of sale of RBF. Petco and the suppliers are both in commercial enterprises and are able to distribute the risk of injury as a cost of doing business, notwithstanding that some consumers may be unwilling to purchase a rat at higher prices. This case illustrates the difficulty of an injured party to trace the origin of the rat. Finally, the rats are greatly distributed in commerce. Based upon these factors, further support is presented to find a pet rat is a product.”<

Fell tells Team 10 the family’s primary concern is making sure this doesn’t happen to another child.

“They are very happy the ruling is out there,” Fell said.

When Team 10 first reported this story, Petco said they have the strictest standards of care for rats and they have customers sign release papers.

A spokesperson said any statements they provided previously still stand.

When Team 10 asked about the court ruling, they said they don’t comment on ongoing litigation.

The trial is scheduled to begin in March.