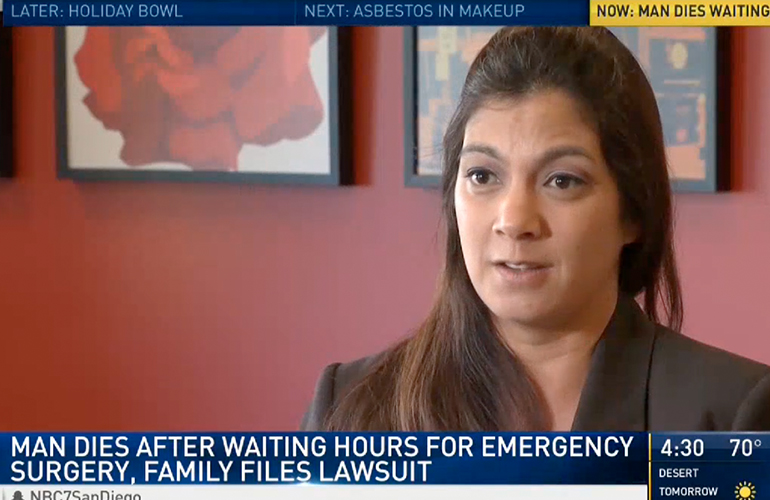 A South Bay family is suing Scripps Mercy Hospital in Chula Vista and a local surgeon, claiming that a four-hour delay in an emergency surgery caused a patient’s death.

According to the lawsuit and interviews with family members and their attorney, Brian Gearhart was in excruciating pain when he arrived by ambulance at the hospital’s emergency room in November 2016.

Gearhart had a history of ulcers and abdominal disease. After two hours in the ER, a specialist confirmed that Gearhart had a puncture of the small bowel. According to the lawsuit, doctors told Gearhart he needed emergency surgery.

The family’s attorney said the ER staff contacted the on-call surgeon, Dr. Yifan Yang, shortly thereafter, at about 10:45 pm. According to the lawsuit, Yang “…indicated he would come to the hospital as soon as possible to perform the surgery.”

But the lawsuit alleges that despite repeated attempts to reach him by phone, Yang did not arrive at the hospital until 2:45 am, and surgery did not start until 3:15 am. By that time, the family’s attorney said Gearhart had a strangulated and perforated bowel, and was in septic shock.

Despite the surgery, Gearhart died the next morning. The medical examiner’s report lists the causes of death as respiratory failure, septic shock and small bowel obstruction.

“By the time the surgeon got there, Mr. Gearhart had declined so far, he was beyond saving,” said Bibi Fell, the family’s attorney. Fell said the hospital had a duty to have a surgeon respond within 30 to 45 minutes of Gearhart’s diagnosis. Fell said bowel perforations and sepsis are “immediate conditions that need to be treated immediately (but) four hours went by and they didn’t, and Mr. Gearhart died.”

Gearhart’s daughter, Briana, was by her father’s side in the ER. She said she was “scared, worried, upset and angry that it was taking so long” for a surgeon to arrive. “If they’d done the surgery in time, I believe he’d still be alive,” she told NBC 7. “If they had fixed the rupture, it wouldn’t have killed him.”

Briana Gearhart said her father’s death still haunts her because he was in terrible pain while he waited for surgery. Gearhart says he father told her that he “was going to die, if Doctor Yang didn’t show up.”

Attorney Fell, of Gomez Trial Attorneys, said Dr. Yang had a duty to respond quickly to the hospital’s request for help, since he was on-call that night and had allegedly agreed to perform the surgery.

Fell said the hospital should have had a back-up plan for another surgeon when Yang failed to arrive as promised. “It’s foreseeable that something could happen to a surgeon,” Fell said, “A car accident, an illness, an inability to get to the hospital in time, or multiple surgeries in different locations.”

According to the lawsuit, Yang was performing another surgery, at another hospital that night. Yang reportedly said he called another doctor to perform Gearhart’s surgery, but the family’s lawyer says her research shows that Yang did not call for back-up.

“We hope that people who are high-up in the administration make note of this, and make real changes for patient safety,” Fell said.

Briana Gearhart said her family filed the lawsuit in part because “We just want to make sure that nobody has to feel the way we felt in those moments, and experience a loss that could have been prevented.”

Scripps Health has not filed a legal answer to the complaint, and a spokesperson told NBC 7 that Scripps Health does not comment on pending litigation.

Dr. Yang’s office did not respond to multiple requests for comment on the lawsuit, by email and phone, during the past week.